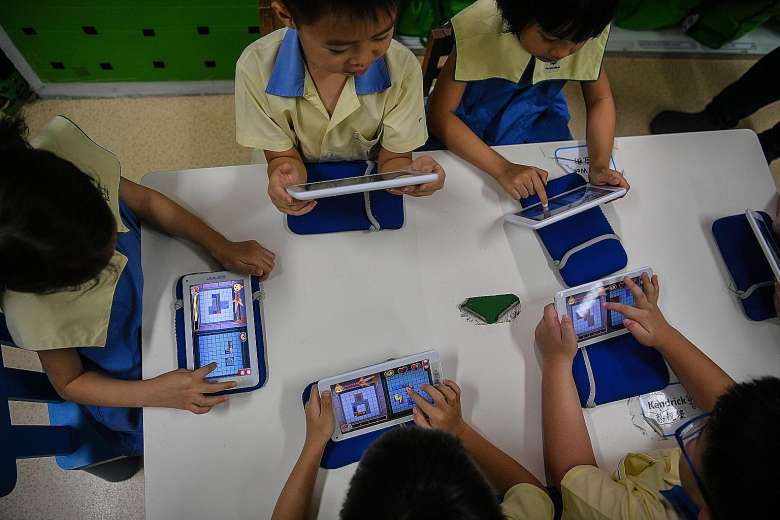 With laser-like focus, they use their fingers to drag different shapes on the right of the screen, to fit into a larger shape on the left. Pre-school teacher Kavita Mogan looks on and helps some children with the activity.

This went on for about 20 minutes last Thursday, in the Kindergarten 2 class at Carpe Diem Juniors in Pico Creative Centre in Kallang.

The children spend an hour each week on this School of Fish curriculum, playing games and reviewing what they learnt the week before.

They are among a growing number of children who are learning computational thinking, or the thinking behind coding, as part of lessons in pre-schools.

While there are vendors that offer coding lessons through enrichment classes, education firm Jules Ventures – which developed School of Fish – is believed to be the only one offering something that is delivered in pre-school settings.

This comes amid efforts to introduce coding to the young here. The Government announced last month a $3 million plan that aims to distribute 100,000 pocket-size, codeable gadgets to school-going children and adults over the next two years to teach basic coding.

In the School of Fish game app, children each have a virtual buddy who guides them to goals through different activities that teach computational thinking – which involves problem-solving by drawing on concepts linked to computer science.

And the children can name and explain the concepts they learnt.

The game that the K2 class played teaches these concepts too.

It teaches decomposition as the shape on the left of the screen is formed by fitting smaller pieces together, and algorithmic thinking as children sequentially try to fit in the largest piece first, followed by smaller pieces.

Carpe Diem branch director Tan Sok Khim said a trial of the curriculum at another branch last year was well-received, so it decided to roll it out to the Kallang branch too. Parents need not pay additional fees for the School of Fish curriculum.

She said: “(The progress) is not something you can really measure. But as they get exposed to such concepts from young, hopefully this translates to thinking skills that would be innate in them.”

Jules founder Jonathan Chan said: “Learning computational thinking is a valuable and vital life skill that enables our pre-school children to be effective problem-solvers in the 21st-century digital economy.”

Meanwhile, Ms Tan said care is taken to ensure children do not have too much screen time. For instance, the children are not allowed to take the tablets home.

Dr Sirene Lim, academic lead of the early childhood education programme at the Singapore University of Social Sciences, said it is still important for children to have different types of play opportunities.

She pointed out that robotics could help children to learn simple coding too.

She said: “2D screen-swiping does not engage young children as much as 3D robotic manipulatives that small hands can hold and move or command with a remote control. Robots can also encourage more social play among children.”

Pre-schooler Chloe said she enjoys her computational thinking lessons. “I like using the tablet. It’s a lot of fun.”

Article taken from the Straits Times.

Get your child the headstart that they need with KidsCode’s coding courses. Starting from $199, teach them the skills that they’ll need for the future! Check out our courses here!

Get your kids to learn how to build mobile apps!

Discover the magic of working with Ez-Robot